Without a doubt, I am sure that Panini will include some type of gimmick in the set for either short print rookie tickets or alternative photo rookie ticket autographs, much like they have done in the past. 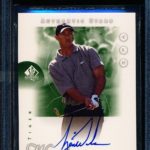