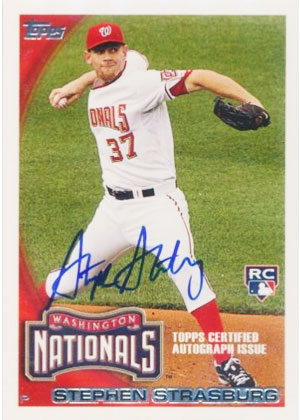 Due to an overwhelming demand for Stephen Strasburg cards during his phenomenal 2010 rookie season, Topps extended its original 660-card set by an additional card for Strasburg. Due to the legalities surrounding the MLBPA-licensed set, Topps was not allowed to include Strasburg in the original 660-card set until he debuted in a Major League game. In order to meet the demand for Strasburg, Topps offered six different versions of card #661 in the Topps set.

This guide is intended to educate you on the various versions of the #661 card of Stephen Strasburg in 2010 Topps.

Randomly inserted into 2010 Topps packs were redeemable code cards for their Million Card Giveaway promotion. These code cards allowed for you to unlock version A, which ended up being exclusively available on through this promotion. The card features a photo of Strasburg taken during his first MLB pitch. This version was announced as a late addition to remaining 2010 Topps factory sets. A telling characteristic of this version is locating Strasburg’s right hand directly under the Topps logo in the upper left hand corner. Identical to version A, except the card features an on-card autograph. Once again, exclusively offered to those who unlocked version A through the Million Card Giveway, owners were given the opportunity to have the card autographed. Each card was machined stamped, and has a production of 299. Available in packs of 2010 Topps Update. A short-print variation of version D, this version features Strasburg in a road-game grey jersey. Another short-print variation of version D, this version features Strasburg in a Elvis wig and pie in his face.