The legend that surrounds the existence of 2006 Bowman Chrome Draft Evan Longoria Superfractor autograph seems like similar folklore of the legend of Bigfoot. Few believe it is out there, and even fewer claim to have actually seen it.

The fact remains that there has been no credible evidence to prove that this mythological card is actually tucked away, in a collectors personal vault, not ever to see the light of day again. Many collectors have hypothesized that the card has indeed been pulled and is sitting in a unbeknownst collectors possession or belongs to someone who may be removed from the hobby all together. Others have created a conspiracy that they believe the card was never even created, or packed out for general consumption.

On the other hand, plenty of collectors still believe this card is sitting in box, still wrapped it factory foil pack, waiting for that one lucky collector to rip it from it’s hibernation and prove to the world that this unicorn does exist.

In the event that this card would ever actually surface and become available on the secondary market has also become a topic of conversation among many collectors. Without-a-doubt, Evan Longoria is one of the prized assets to the youth movement in professional baseball, and has the stuff to make him a perennial MVP candidate year-in, and year-out. On the heels of some of the largest superfractor sales (Strasburg and Harper) in recent memory, the Longoria superfractor has the potential to reach even higher figures due to the lure and chase surrounding it’s legend.

Without-a-doubt, the Longoria Superfractor remains one of the greatest unsolved mysteries in the collecting world. In today’s ever-connected, Internet-everywhere world, I have to believe that if this card was currently in someones possession – we would know about it. Until then, enjoy busting those boxes of 2006 Bowman Draft in hopes of landing on the greatest modern cards to have ever been produced. 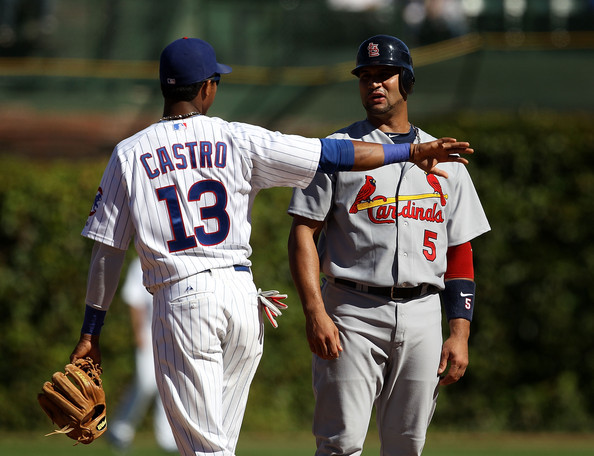 At 21 years old and the youngest player in the league, the Chicago Cubs young stud of a short stop, Starlin Castro, is arguably off to one of the best starts of the 2011 MLB campaign. Currently hitting 28-for-67 (.418) and leading the MLB in hits and is among the leaders in runs, triples, and OPS. Castro also has thrived at the top of the lineup. He’s 18-for-32 (.563) and has scored eight runs in seven games as the leadoff man.

Castro is batting .345 since last years All-Star break – no one else in the National League has more hits during that time. More times than not, when checking the box score of the Cubs, you will see Castro names next to multiple hits in that game, he just recorded his ninth multihit game of this season. In his first Major League game on May 7, 2010, Starlin Castro homered in his first plate appearance and set a Major League record by collecting six RBIs in his debut. Castro’s 28 hits through his team’s first 15 games are the most in the Majors since 2000, when Darin Erstad had 29, and are the most for the Cubs in the live ball era.

Now, less than a year removed from that phenomenal debut, Castro has burst out of the gate and is collecting hits at a rate that makes one wonder what other company he might be able to keep.

I have been tracking some of Castro’s sales on eBay since the start of the season. I have broken down his 2010 Bowman Chrome Autograph sales below to show the progression some of card values are taking as Castro becomes more of a household name.

So believe the hype, Castro’s as good as advertised. 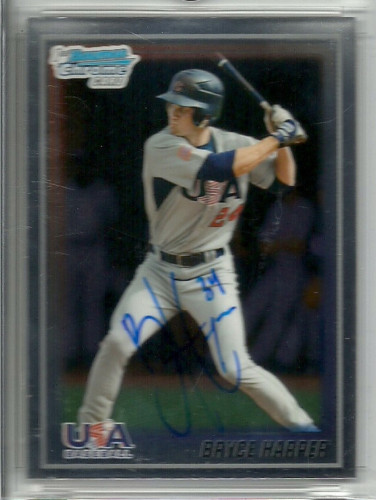 The very first 2010 Bowman Chrome Bryce Harper USA Buyback Auto has landed on eBay. The seller has it online with a BIN of $3,000. As you can see from the gallery, the buyback autos feature an on-card auto on the front and are machine numbered to 100 on the back. These cards are only available through the wrapper redemption from Topps. 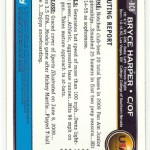 Topps recently announced that the 2010 No. 1 draft pick of the Washington Nationals will be part of a sneak preview of the company’s 2011 Diamond Anniversary autographs in Sterling. The first one to hit eBay should fetch a pretty penny.

Harper, who is signed to Topps exclusively for autographs and memorabilia, signed a total of 60 cards with three inscriptions – “Happy 60th Topps”, “Happy 60th” and “Happy Birthday Topps.” For over 60 years, Bowman has been the go-to brand for collectors who follow the game’s top Rookies and Prospects. Bowman’s home field advantage continues in 2011 as 30 Bowman Rookies and 110 Prospects take the field led by #1 Draft Pick Bryce Harper!.

An original 1948 or ’49 Bowman Baseball card is embedded into a book card along with a cut signature from the legendary player depicted.

Sixty players past and present have signed these cards along with an additional inscription wishing Topps a “Happy 60th!” All autographs and inscriptions are signed directly on each numbered to 60 card. Three players’ cards will be inserted into each baseball product throughout 2011. 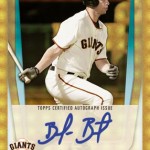 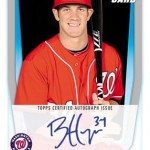 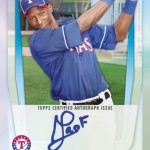 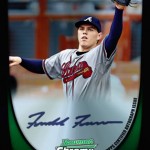 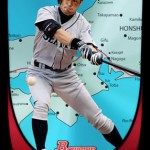 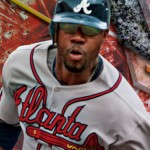 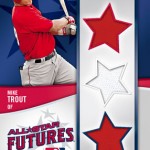 One of the most anticipated Baseball product releases each year is without-a-doubt the Bowman Draft Picks & Prospect series from Topps. This year Topps did not disappoint, as the product is loaded. It features 32 different Chrome Auto cards of players taken, many first round choices, in last years MLB Draft. Along with the Prospect Autos, it is full of more Chrome USA Autos, as well as, AFLAC Autogrpahs – which are again machine numbered.

One of the most sought after cards from the product is Topps first certified autograph of Bryce Harper. His AFLAC Auto has been fetching over $600 on the secondary market with reports of nearing $1000 at release. The card is machine numbered out of 230, so be cautious when looking to buy.

The USA Auto sets features some of the youngest talent on the USA team. The 16 and under players are highlighted in the set and compliment the autographs inserted in the 2010 Bowman Chrome release.

Over all, the product has a very strong autograph checklist, with all of the first round signees, the potential is very high on a number of the cards too. The 3rd overall selection in the 2010 MLB Draft, Manny Machado, has been one of the best sellers in the product, with base autographs averaging a sale price of $53 and refractors averaging prices of $72. A Red Refractor Auto of Machado also ended at $1,538.00. Bulk breakers have gone pretty crazy with this product as some of them have been breaking 20, 30, and even 50 cases to list on eBay. It is certainly a buyers market now with the flood of product hitting the secondary market.

Here is a detailed list of the first week’s sale averages on eBay of the 2010 Bowman Draft Picks & Prospects Chrome Autograph inserts:

Stay tuned, we will be doing a Part 2 and 3 of this breaking down the sales of the AFLAC and USA Autos in the Draft release.

The first 2010 Bowman Draft Bryce Harper AFLAC Auto has hit eBay. Looks to be machine numbered to 230 in the upper left hand corner under the Bowman logo. Seller as a BIN at $999 (was at $899). Here is a look at a cumulative look at all of the 2010 Bowman Chrome Baseball Prospect Autograph sales through the first full weekend of release. There has been 1200+ sales since its release last Wednesday, and I have accumulated each of the sales via eBay and put them together for you to get an idea on which Prospect Autographs are selling the best, at product release.

There are 39 total autographs inserted in this release, I have been unable to find any sales data for BCP217 Noel Arguelles, so I am guessing he was left out of the product. Also, this list does not include any USA Autographs – that data will be looked at later.

You can click the table row headings to sort the data for that row. If a cell has a $0.00 represented in it, it means there was no sales data accumulated for that particular card.

With each new Bowman (or Bowman Chrome) release, there is much anticipation around the heralded Superfractor chase within that product. A single card produced that creates hysteria and chaos among collectors hunting down the cards. This year the Superfractors are inserted 1 in every 48,000 packs, or roughly 1 in every 222 cases! A very tough pull.